Sharks are fussy eaters. They seem not to like humans much. I think the problem with humans is that their meat tastes so bad (too many chemicals). In the interest of shark health I suggest that human swimmers should be labelled (like other meat is labelled) so the sharks know what they’re eating. Chemical-free type vegetarians, for example, could be stamped “organically certified”.

An insult to all rabbits

Population seven billion! Wake up humans, or better still, cross your legs! This can’t go on. As one commentator recently said you’re “at it like rabbits”.

This last remark of course is highly offensive to rabbits.  A rabbit I know…(George, my human keeps rabbits as well – how weird can this guy get?)  Anyway, I digress.  George parked this rabbit on a chair next to my aquarium.  The rabbit and I struck up a conversation.

I’ve learnt rabbit. It’s not too hard. Most fish speak numerous languages and are experts at cross-species communications  – all that fish oil, makes us intelligent. I tried some telepathic rabbit whispering for a bit but their train of thought jumps all over the place (what do you expect from rabbits). And a little like this post – must be the rabbit influence, even just thinking about them makes your thoughts hop .

Anyway this rabbit – between chews on its carrot – says he is sick of lewd references to rabbit reproductive practices by humans. In fact, the rabbit said that he found the whole situation a source of great irony.

THOUGHT HOP: Yes, the rabbit actually used that expression “a source of great irony” or at least the rabbit equivalent. Rabbits are better educated these days.

The rabbit said that it was ironic that humans use the saying “at it like rabbits” because rabbits have their own term “at it like homo sapiens” when they are describing promiscuous behaviour.

THOUGHT HOP: A behaviour I might add they don’t approve of. Rabbits are rather prudish in matters of sex. In fact the rabbit told me they don’t like it at all. He said they only do it because they sleep walk a lot. He said it was all very disturbing because they never know who they will wake up next to.

Anyway, as far as humans are concerned I think the rabbit was right. “At it like homo sapiens” should be the new catch-cry. Seven billion kind of proves it.

FINAL THOUGHT HOP: For those of you interested in other species communication, rabbits do not talk like Bugs Bunny at all. They sound much more like Marlon Brando in “The Godfather”.

See, you learn something new every day.

But let’s tease things out. Fins up – how many of you have ACTUALLY seen a dolphin jumping up out of the water in front of a rainbow?

OK, one of you. (There’s always one. What were you smoking at the time?)

Now for the rest of you the answer was ‘no’ and why? Because it’s just dolphin propaganda.

Dolphin are so goody-goody, so wholesome. But it’s all a great con. They are just air-sucking mammal deviants who’ll do anything for a fish. (I am sure you’ve all seen them “turning tricks” at some sea world.)

So why do you humans suck up to dolphins? (If it was a certain Siamese fighting fish, I’d understand.) Maybe it’s some kind of insurance plan – you hope they will save you from drowning or even better, pop up to save you from a shark attack.

Well, maybe. But you better have a fish at hand.

Posted on April 29, 2010 | Comments Off on Food standards for sharks

Sharks are fussy eaters. They seem not to like humans much. I think the problem with humans is that their meat tastes so bad (too many chemicals). In the interest of shark health I suggest that human swimmers should be labelled (like other meat is labelled) so the sharks know what they’re eating. Chemical-free type vegetarians, for example, could be stamped “organically certified”.

Comments Off on Food standards for sharks 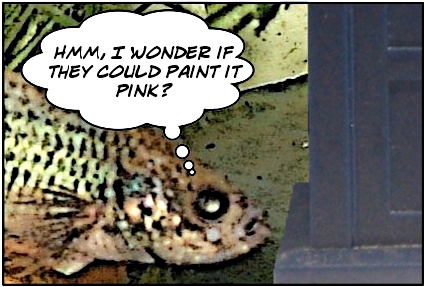 Could Wise Colin be the new Doctor Who? Colin considers the colour scheme for his TARDIS.

Yes, I’m a Doctor Who fan.  HOWEVER, as President of the Wise Colin’s Fish Hall of Fame I must protest on behalf of all aquarium fish about the show’s continued use of hominid-looking types for the main leads*.

Don’t you humans realise that we aquarium fish, situated as we are in lounge rooms, waiting rooms and restaurants around the world, are often forced to watch TV, sometimes against our wills. In short, we are viewers too and it is about time our interests were taken into account. We need stars we can truly identify with.

So why not some positive discrimination? How about the next time you choose a Time Lord, you choose a fish (I could be persuaded to take on the role and I have an excellent female companion, a veteran time-traveller and fish fossil, Mrs Robinstone.) Of course the whole series will have to be set in water – hey, we’ve had enough of air. (So boring!) Humans could swim in for guest appearances – snorkels provided, or perhaps with aqualungs, if the budget will stretch to it.

As for villains and nasties, there are fish aplenty with rough heads.

Mrs Robinstone (aka The Cougar) is interviewed about her aspirations for the role of the Doctor's female companion.

*Yeah, yeah – I know he’s “got” two hearts. I could have four gills if that will help my chances.

Comments Off on Fish wants to play the new Time Lord

Posted on April 26, 2010 | Comments Off on Goldfish party animals

Alistair, the world’s brightest goldfish has a party while his owner Lance is away. 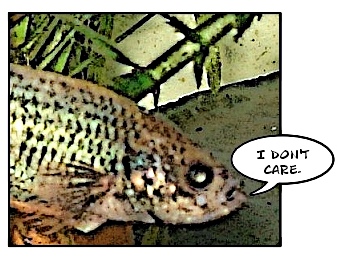 Comments Off on Goldfish party animals

Let me set the scene.

Colin, seconded by his trusty fish-whisperer and human companion George gets ready for the challenge. Whilst nearby, goldfish Alistair and his human goldfish-fancier Lance, also prepare.

The time for the duel approaches. Grim-faced, the seconds meet. They toss a coin to see who will go first.

Colin wins. Each fish is allowed one joke only.

Now it is Alistair’s turn.

The pathetic attempt of Alistair, the world's best and brightest goldfish to tell a joke. Note Lance is prompting him. Tut, tut.

VERDICT: I think I’ll let you be the judge.

Bubble Wisdom
Create a free website or blog at WordPress.com.